Skip to content
What is the pay gap at Railnova?

What is the pay gap at Railnova?

Why would I ask myself: “What is the pay gap at Railnova?”. You see, there are an array of dates for equal payday, both in the United States and in Europe. Seeing posts go by on LinkedIn got me thinking about Railnova’s stance on equal pay. I was pleasantly surprised to learn that our wonderful CHRO, Diane, had already asked herself this very question! She had already calculated the pay gap at Railnova a while back.

What exactly is the pay gap?

Before we go any further, let’s explore what exactly we are talking about. The pay gap or gender pay gap generally refers to the average salary difference between men and women.

If you want more details, there are many videos and articles that go more in-depth, like the 50 in Tech’s video that you can see here: https://app.50intech.com/masterclass/the-state-of-salaries-and-the-gender-pay-gap-in-european-tech

What is the pay gap at Railnova?

Generally speaking, the pay gap hovers around 3,1% in total. Railnova’s pay gap is 2 whole points below, at 1.1%! And although 3,1% sounds reasonable, when put in perspective this would mean the loss of one month’s salary.

While it does mean women are losing money, the pay gap is the symptom of something deeper. It might be a compound of old habits, biases, and a lack of transparency within an organization.

Interested to learn more about our pay scales? Keep on reading!

Read on to learn more about the pay gap at Railnova and the policies in place to close it from our very own CHRO, Diane Müller.

Compensation is a confidential topic. This makes it hard for employees to understand the priorities and special care themes on the basis of their work culture. As mentioned above, this can also foster a lack of transparency, which Railnova decided to address head-on from the start.

When I joined Railnova in 2021, there was an internal formula to adapt the retribution offer starting from fresh Master graduates, and then increasingly as they get raises.

START: Defined amount for a graduate with a Master in the pocket + all benefits (the amount was adapted in case of Bachelor or further studies/experience) 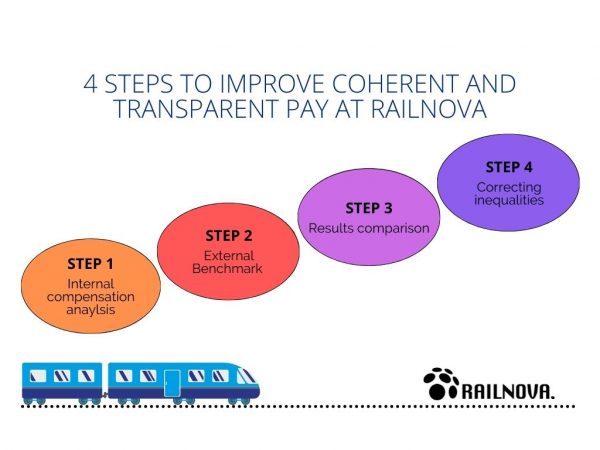 Avoiding other types of pay gap

As selection processes were being completed, offers were being made, there was an urge to do some proper research and verify that we were not jeopardizing the compensation coherence internally.

After examination, there was a pay gap between internal retribution and market rate. In addition, the formula starting figure had not been adapted in the past years. In order to identify it, a proper benchmark was needed. We looked at the Brussels tech industry job market closely to better align.

Pay gaps and lack of trust

Pay inequalities lead to dissatisfaction, but if you go into the details, it’s way worse. HR doesn’t discuss compensation openly as it is a confidential topic, but colleagues wonder and ask.

In cases of inequalities, colleagues experience jealousy. They misevaluate each other’s work, there’s a depreciation of relationships, and rancor toward the manager. This global misunderstanding leads to a loss of trust in the company’s management. All of that because you didn’t do your homework.

Doing our homework is worth it!

Don’t get me wrong, reviewing internal compensation and doing a job market benchmark is a lot of work. It requires to step back from daily operations to get a bigger picture. However, the benefits of having a transparent compensation system make it worthwhile.

Here, the challenge was to find a way to compare compensation for

Like in any first internal compensation analysis, there were a few employees out of range, but less than what I had seen in the past. Some upwards adjustments had to be made, especially for employees who took on Beacon duties in 2021.

After defining the levels, I did an external benchmark study. I took into account 3 different sources of retribution packages for Belgium: Michael Page Salary Benchmark 2021, Robert Half Salary Guide, and the salary scale’s website.

That was quite a bit of work as one presented the full retribution, the other only the salary, some presented the numbers on a 13.92 monthly basis, and another on a 12-month basis. Two factors that I didn’t take into account for the comparison: company size (small) and industry (IT).

Not all data sources allowed me to extract data per company size, and sector, so I focused on position and work experience. Regarding the size of the company, Executives in large organizations tend to get paid more than in smaller companies.

Large organizations have disadvantages on the complexity and slow hierarchical decision-making process, and the reduced autonomy that results from it. (= Vote for small companies!!) For the industry, the highest retributions on the market are in the IT and Pharma industry. Therefore, I counted on the fact that these two factors would balance themselves out in our case.

The ranges represent the minimum to maximum total compensation package per level. We crossed the data from the external benchmarking and the internal compensation analysis.

Based on that we have defined ranges for each level. Our ranges are above average market rate, in the top 75 percentile.

To implement and align compensation internally, we organized a 360 review in parallel and had it followed by a performance review the next month. Our promoted managers received the raise equivalent to their new level of responsibility, while the ones who were out of range were realigned to match their current level.

Railnova continues to work towards reducing the gender pay gap even more. In doing so, it is also reducing all pay inequalities. This is all part of making a safer, more inclusive, transparent, and healthy work environment.

If you think you would be a good fit, follow this link to see if we have any openings in your area of expertise: https://jobs.railnova.eu/!

Looking for a summer job or internship in Brussels?

If you're a student and live in Brussels, why not take part in Railnova's 2022 summer internship programme?

Can you believe we will reach the halfway point of the year in a few weeks? Our team has kept up the work these past few months, time to present what new features our teams have been working on. Read on to discover our new features!

Maxime, from Student to Master

webmaster2022-04-07T12:28:29+00:00
Page load link
We use cookies to ensure that we give you the best experience on our website. If you continue to use this site we will assume that you are happy with it.
OkRead more
Go to Top